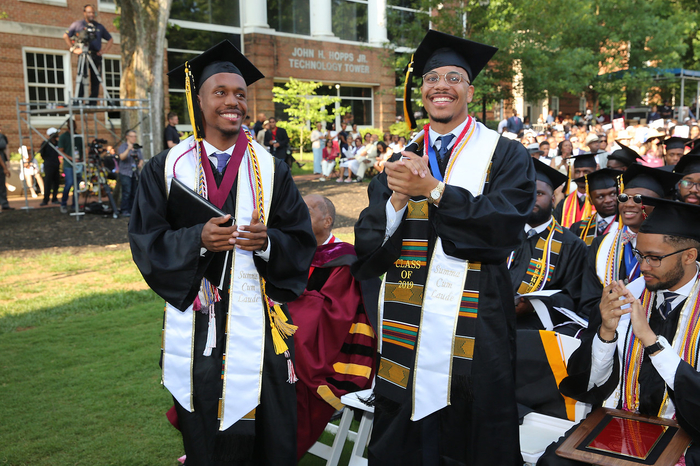 Morehouse College has moved its 136th annual Commencement to Dec. 13, a date that was chosen by students and administrators to reduce the community’s exposure to the novel coronavirus disease. The decision was made in partnership with leaders from the Class of 2020 and the Student Government Association after careful consideration of federal guidance on strategies to curb the spread of COVID-19 during the global pandemic. The U.S. Centers for Disease Control recommends canceling events that attract 50 people or more for the next eight weeks to keep the virus from reaching new communities. Morehouse’s original graduation date was May 17. More than 5,000 people typically attend Commencement season events and ceremonies each spring. “Commencement at Morehouse College is a rite of passage that is symbolic of the transformative journey that each scholar undertakes on the road to becoming a Morehouse Man. During Commencement, we challenge students to draw on the lessons they learned and the experiences that helped them to grow, and go forth with honor to change their communities, the nation, and the world,” said President Thomas. “It takes a village to help our students reach this academic milestone, and we want to open the ceremony to that village without risk of harm falling upon them.” Commencement at Morehouse is rich with tradition, ancestral pageantry, motivational speeches, and sometimes, surprises. In 2019, Morehouse’s 135th Commencement made history in higher education when Founder, Chairman, and CEO of Vista Equity Partners, Robert F. Smith, announced that he and his family would erase the student loan debt of the Class of 2019. Smith later donated $34 million to the Morehouse College Student Success Fund to pay off the debt that seniors and their parents accumulated funding a Morehouse education. A speaker for Morehouse’s 136th Commencement at 10 a.m. on Dec. 13 has not been announced. Administrators are still finalizing the location of the event, which is traditionally held outside at Century Campus in the shadow of Morehouse’s oldest building, Graves Hall. The December ceremony will be held indoors instead. Each member of the Class of 2020 will receive 10 tickets to share with family and friends. The Baccalaureate exercise will be held at 11 a.m. on Dec. 12. Commencement Chair Henry M. Goodgame Jr., Morehouse’s Vice President of External Relations and Alumni Engagement, said Morehouse is working with students and parents to make the transition to a December Commencement as seamless as possible. The valedictorian and salutatorian for the Class of 2020 will be announced after final grades have been submitted to the College following the continuance of instruction online. High achievers eligible for departmental honors and other special academic recognitions will still receive applause from their professors and peers. The Office of Academic Affairs is working on a plan to host awards ceremonies virtually. Senior Week festivities are also being planned by class leaders. “We wanted to make every effort possible to allow members of the Class of 2020 to have their day in the sun. They have worked hard this past four years and deserve to have their families and friends see them walk across the stage and receive their degrees,” said Goodgame. “Pushing Commencement to December gives us time to have it as far out as possible to protect the health and safety of the community, but still within the same year for the graduating class.” Seniors who cannot return for graduation have the option of receiving their degrees in the mail or waiting until next May to graduate with the Class of 2021 at the 137th Commencement. Alumni whose reunion was scheduled in May will celebrate their reunion milestone at Homecoming from Oct. 15-17, officials said.

Dr. Cory Hebert Explains The Concept of ‘ flattening the curve ‘ of coronavirus spread

Dr. Cory Hebert Explains The Concept of ‘ flattening the curve ‘ of coronavirus spread