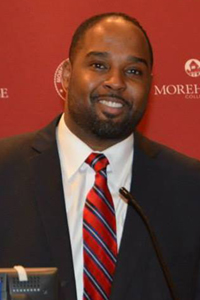 A native of Marlton, New Jersey, Shadeed enrolled in Morehouse College in the summer of 1996 to study Biology/Chemistry Pre-Med. Dean Thomas Blocker played a pivotal role in Shadeed attending Morehouse.  Shadeed Abdul-Salaam has worked as an Educator, Public Health Researcher/Analytical Chemist at Centers for Disease Control and Prevention’s (CDC) Emergency Response and Air Toxicants Branch. Shadeed has training in Biology, Chemistry and Public Health; he attended Morehouse College and Emory’s Rollins School of Public Health. He has gained experience in various environmental/public health based research projects at several universities and institutions, such as Princeton University, University of California at Davis, and CDC.

He also previously worked as a manager for a pharmaceutical firm. At CDC, Shadeed worked on various research projects as an Analytical Chemist within the tobacco analysis section as a Subject Matter Expert; he has contributed to various publications, and served as the liaison between the laboratory and the public policy arm in CDC’s Office of Smoking and Health.

Shadeed also serves as the President of Morehouse College’s distinguished Alumni Association in Atlanta, Georgia as well as on various boards in the region.  Shadeed enjoys spending time with his family, traveling to enlightening places and working outdoors on environmental based projects.