Zimbabwe is Home, but Graduate Found Another Family at Morehouse 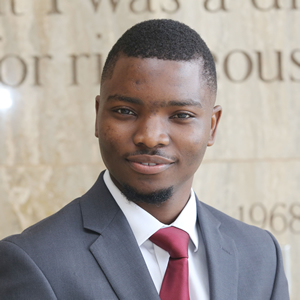 One of the first things Livingstone Masango ’18 noticed when he left the Delta jet that carried him to Atlanta from Africa four years ago was how hot and humid it was in Georgia.

“I got an instant headache,” said the Zimbabwe native. “It gets really hot in the summers here. My country has sunshine, but it’s warm and not as humid.”

Masango adjusted to the Georgia weather, though, as well as the homesickness that came from being so far away from friends and family, particularly his mother. (His father died when Masango was 7). He launched into classes at Morehouse, decided to major in economics with a minor in math, became a Morehouse Presidential Ambassador, proved himself to be a leader on campus, and in 2018 was named the highest-ranking senior in the Department of Economics.

Today, Masango is working on campus while applying to graduate school at prestigious universities such as The University of Chicago, Georgetown University, and the University of Oxford, which he dreams of attending as a Rhodes Scholar.

Many of his accomplishments can be traced to the Higherlife Foundation—founded by Strive and Tsitsi Masiyiwa—which offered Masango a college scholarship. But Livingstone’s success is due to more than academic talent and scholarships that paved the way, said Dean Harry Wright, Morehouse associate dean for international student services. They are personal characteristics that Wright noticed when he first met Masango in 2014, with a group of nine other scholarship recipients.

“I could tell he was clearly a leader in this group. He was very responsive and alert, and paid attention to details,” Wright explained. “He was academically superior, well-disciplined, and resourceful.

“I think there’s no question that this kid is ‘called.’”

One of Masango’s earliest supporters was a teacher in Zimbabwe who took a special interest in him, lending the boy her laptop computer and teaching him about the Internet. Then, while on scholarship in high school at a Christian boarding school, he was brought to the attention of Higherlife Foundation officials.

He was offered a scholarship and came to the United States in a group of 10 headed to Morehouse.

At Morehouse, Masango has had the support of Dean Wright, professors, other scholarship recipients, college friends, and Juliet Elu, chair of the Department of Economics who is helping him to apply to graduate school.

Masango also found support at The Coca-Cola Co., which gave the Phi Beta Kappa student two summer internships in data analysis. Since he’s not an American citizen, however, Masango is unable to work at such a company full time, though he is allowed to remain in the United States and attend graduate school.

“I can stay through my doctorate,” Masango explained. “Ultimately, if you stay here long enough you usually get a citizenship, but it’s not a guarantee.”

A trade-off for staying in the States, however, is that Masango acutely misses his family and friends in Zimbabwe, as well as his beloved home country.  “I do love my country. I wanted a situation to come here to study and then go back there,” he said.

Masango describes Zimbabwe as being rich in resources, like gold, uranium, and coal. The country suffers, though, from a high unemployment rate, political problems, and economic challenges.

“That’s where my passion stems from.”

After earning his master’s and doctoral degrees in financial economics, Masango plans to secure a job in banking.

“I don’t have a passion for teaching; I want to go into business,” he said. “I always dreamed of working with a big company, and having an impact somehow on the business side. And I want to go home and use the things I’ve learned here to play a role in changing my country.”

After a career in business, Masango plans to be an entrepreneur and implement, in Zimbabwe, his ideas about what makes America great.

“I would say Morehouse really redefined the way I look at things, the way I carry myself, the way I talk, my conduct…” he said. “I was kind of timid; I didn’t have my voice. Now, because of Morehouse, I’m able to speak for myself and others.

“Morehouse has really been a special place for me to see my life outside of what I thought I was.”